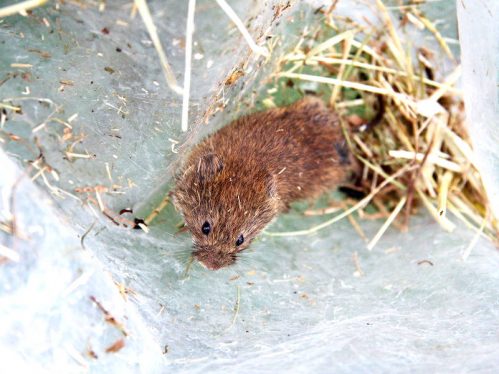 The Common Dormouse (also known as the Hazel Dormouse) is rarely seen as it is mainly nocturnal. During spring and summer they spend a large portion of time up in the branches seeking berries, buds, hazelnuts and insects. In the cold winter months it will hibernate, sometimes below ground, or at ground level often under logs and leaves. Its habitat is woodland, hedgerows and dense scrub.

YACWAG has a group of volunteers who have an interest in surveying small mammals on our reserves. This continues work started in 2001 by a Bristol University PhD student which confirmed the presence of Harvest Mouse in Ten Acres. Since then we have found their nests on the Strawberry Line and in our other fields. The work carried out by volunteers informs us whether certain animals can be found in our reserves and eventually could help guide our management of the grassland for optimum habitat. YACWAG’s barn owls and kestrels depend on the health of the population of voles, for example. Through dissecting and analysing the contents of pellets (the coughed-up remains of prey swallowed whole by owls), we already had some idea of the small mammals eaten by barn owls nesting on our land, but trapping on our reserves can confirm their presence. When we analyse the contents of barn owl pellets we usually find the main prey is voles and shrews. 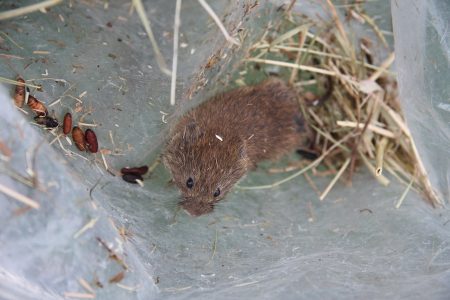 In this area we have three types of vole:

•     The short-tailed field vole – favourite food of the barn owl. We know it particularly likes Yorkshire Fog (a species of grass growing in abundance on Congresbury Moor).

•     The bank vole – slightly larger and living in holes in banks.

•     The water vole – there are no recent verified records from Yatton and Congresbury but we know they were historically abundant and, as the habitat is right for them, we are expecting to find them soon.

In our fields we also capture three types of shrew:

•     The water shrew – a rare animal of the wetlands, the largest of the shrews.

•     The common shrew – all shrews are insectivorous and have a poisonous bite to use on their prey.

Also to be found in the traps are wood mice.

The traps used by YACWAG are specially designed to cause no harm to small mammals and they are released unhurt a few hours later. The traps contain  bedding and food, so the animals’ time in the traps is not too dangerous or uncomfortable for them. When the traps are emptied it provides an opportunity for people to see ‘real, live’ animals close-up and watch them being released. All are welcome.

To identify small mammals and learn more about them please visit The Mammal Society - a charity advocating science-led mammal conservation.

The hazel dormouse Muscardinus avellanarius, made famous by Lewis Carroll’s depiction of the snoozing mouse in the teapot in Alice in Wonderland, was once common in North Somerset. Dormice were the most popular of all rodent species in Victorian times. Foresters and wood-cutters often found the beguiling mice slumbering in winter when coppicing, bringing them home as Christmas presents. The species was so prolific that school children would trade them in the playground and Beatrix Potter even had one as a pet.  Hazel dormice are part of one of the most ancient rodent groups in the world, dating back to more than 40 million years, and have been native to the UK for at least 10,000 years.

Dormice are big eaters and need a lot of food to survive the winter. They are one of the only British mammals that remain truly dormant, usually for at least four months of the year, and spend up to three quarters of their life asleep. Dormice weighing less than 15g by the winter hibernation period simply do not have the reserves for their body to last the winter, despite the slowdown of their metabolism. It is estimated that 40-50 per cent of dormice do not survive each hibernation.

As well as plentiful food, they need a varied diet as the seasons change: from flowers on trees and shrubs in the spring, insects such as aphids mid-summer, to blackberries and hazelnuts in the autumn. As a result, dormice are fussy about their habitat, requiring well managed woodlands well-connected by tall, wide and diverse hedgerows. Since the 1940s, over two-thirds of British hedgerows have been lost and non-commercial woodlands are no longer extensively or regularly managed, particularly by coppicing which encourages regular regrowth of fruiting and flowering species. Hazel dormouse population counts have diminished by more than a third even since 2000. Surviving populations are increasingly isolated and compete for more limited food resources with other species. Climate change with warmer winters and springs also threatens the lifecycle of the dormouse because of the altered timing of flowering, fruiting and insect emergence.

King’s Wood in Cleeve used to have one of the highest counts of hazel dormouse in the UK in the 1990s. It was since undermanaged but YACWAG have been helping to monitor the woodland after it was purchased by a local landowner in 2012. Counts are still much lower than the 1990s but several nests with dormouse pups have been recorded, proving that the species is still breeding locally. The sympathetic management which is ongoing in the woodland should help bolster numbers of the species. 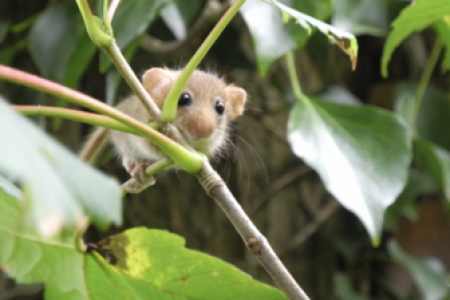 If you think you know where there are hazel dormouse or own land in these areas and want to find out whether dormice are present, get in touch. The species is very elusive and mostly nocturnal but can be distinguished from other mice by its squirrel-like appearance. It can be identified by its distinctively long and furry tail as well as golden brown fur, large eyes and short muzzle. If you are very lucky, if you hear a rustling in a hedgerow look to the highest point. If disturbed, dormice will usually run as high as possible and look down on you before finding a new resting spot to take another much needed nap! 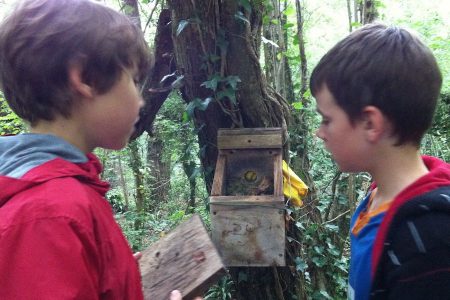